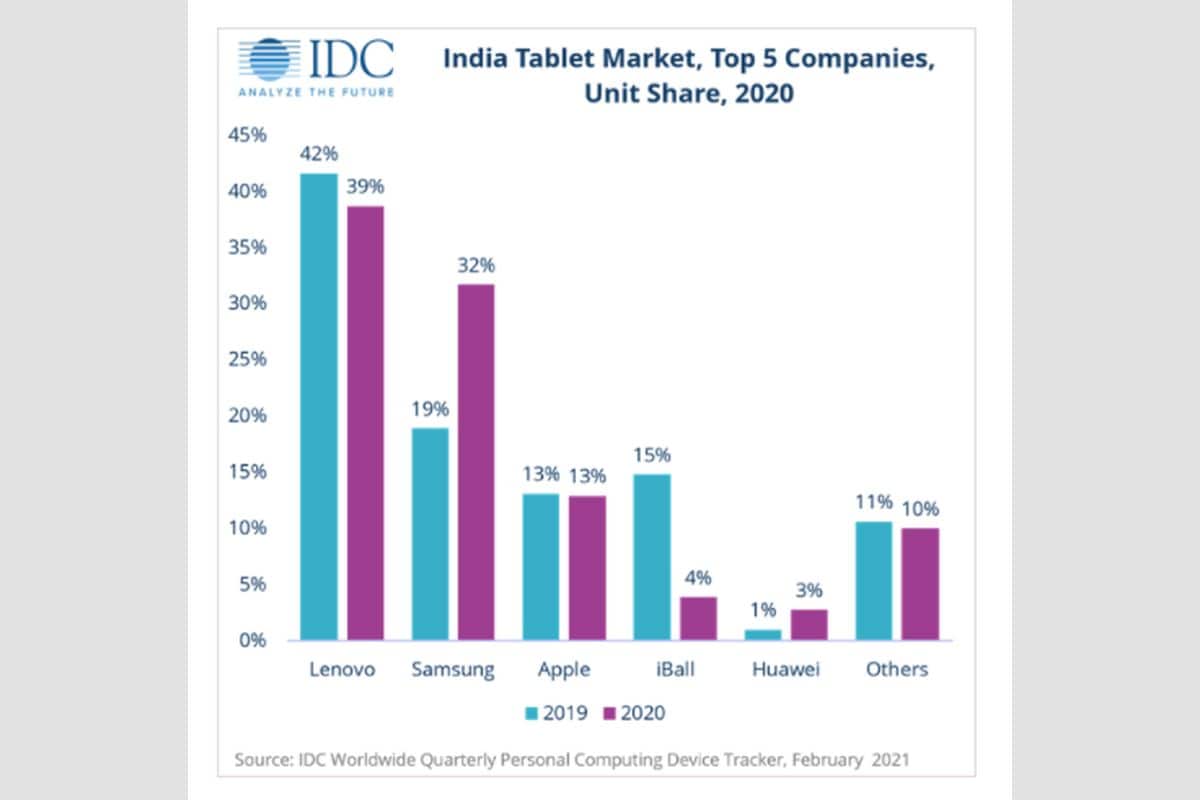 India’s tablet market has recorded a pandemic-driven 14.7 percent year-on-year (YoY) growth after a continuous decline for four consecutive years, according to the data revealed by International Data Corporation (IDC) India. With a total shipment of 2.8 million tablets in 2020, the consumer shipment marked a 59.8 percent growth over 2019, thanks to the increased demand for tablets as e-learning devices. Lenovo maintained its top position in the Indian tablet market while rival products like Samsung Galaxy Tab S6 Lite and Apple iPad 10.2-inch also saw increased shipments. However, commercial shipments to India experienced a decline in 2020.

As per the IDC report, 2020 was the biggest consumer year for Lenovo, with the company recording a 153 percent YoY growth. The Chinese brand still ships the highest number of tablets to India, recording a growth of 6.6 percent over 2019.

Samsung registered a 13-percent point jump in its market share in India over the last year, making the company the top gainer of 2020. The South Korean company’s solid control on component supplies aided this growth as it maintained its top position on the consumer segment ladder, with shipments seeing a 157 percent growth over 2019.

Replacing Mumbai-based iBall, Apple took the third spot in India’s tablet market reporting a growth of 13 percent in its shipments. Although the California-based company had to struggle with stock availability throughout the year, the launch of new the iPad models helped Apple to climb to the third position in the latter half of 2020.

iBall saw 69.9 percent decline in growth over 2019. The Indian company faced challenges in managing its supplies during the pandemic leading to the negative growth.

Huawei was at the fifth position throughout 2020. Online popularity of the Chinese brand, along with satisfactory price points, led the shipments for Huawei tablets to grow three times over 2019.

As consumer shipments for tablets saw a boost, commercial shipments experienced a decline of 14.3 percent YoY in the Indian market. This was due to a few government projects being postponed to 2021. Top brands like Lenovo reported a 15.1 percent decline in its commercial shipments.