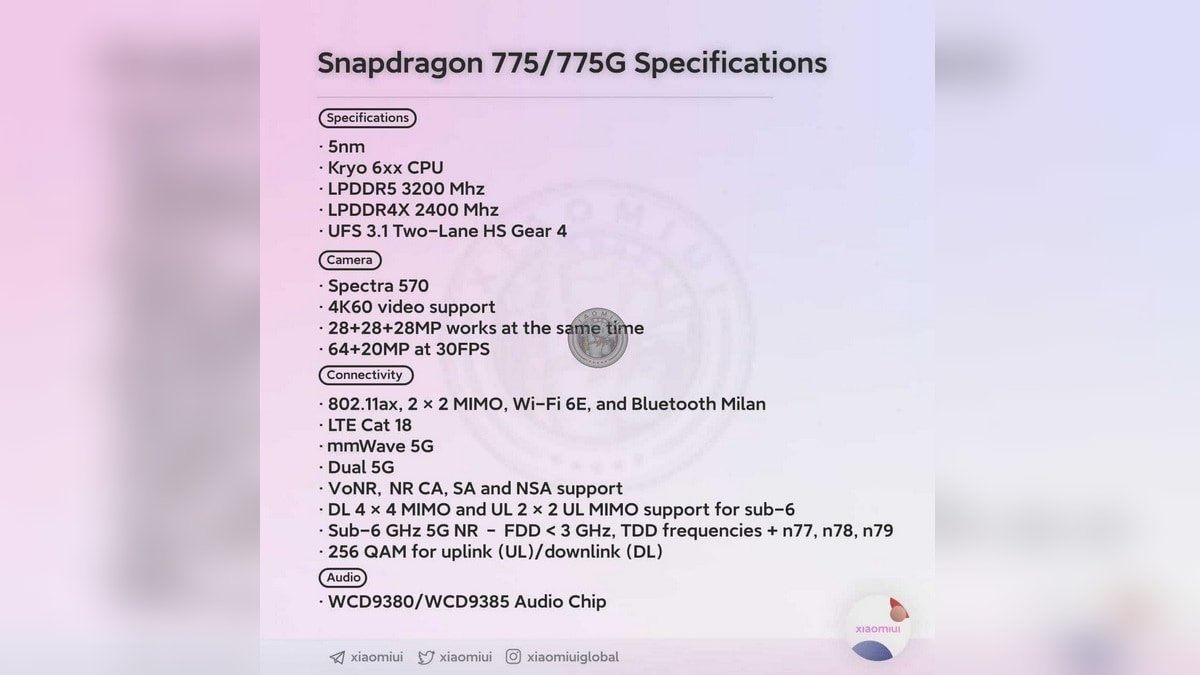 Xiaomiui, a channel on Telegram, shared the alleged specifications for the rumoured Qualcomm Snapdragon 775 series of SoCs. Mentioning the Snapdragon 775 and Snapdragon 775G, the leaks show they will be based on a 5nm process with Kryo 6-series CPU and support for LPDDR5 RAM clocked at 3,200MHz. It will also support LPDDR4x RAM clocked at 2,400MHz and UFS 3.1 two-lane HS Gear 4 storage.

In terms of camera support, the Snapdragon 775 series is could feature the Spectra 570 ISP with support for up to three 28-megapixel cameras at the same time. It can also process a 64-megapixel sensor along with a secondary 20-megapixel sensor at 30fps. Coming to connectivity, the leak shows support for Wi-Fi 6, Wi-Fi 6E, LTE Cat 18, mmWave 5G, and Sub-6 5G.

It is unclear what the differences between the Snapdragon 775 SoC and Snapdragon 775G SoC will be as the leak does not clarify the same.

The channel also mentions that the Snapdragon 775 series may power the rumoured Mi 11 Lite. However, this goes against previous leaks that mention the Snapdragon 732G SoC. It should be noted that a report by XDA Developers mentions the leaked image come from an earlier revision of the official material that is out of date.

As mentioned earlier, Qualcomm has not shared any details on the Snapdragon 775 series of SoC and neither has Xiaomi about the rumoured Mi 11 Lite.

Is Mi 10i a OnePlus Nord killer? We discussed this on Orbital, our weekly technology podcast, which you can subscribe to via Apple Podcasts, Google Podcasts, or RSS, download the episode, or just hit the play button below.