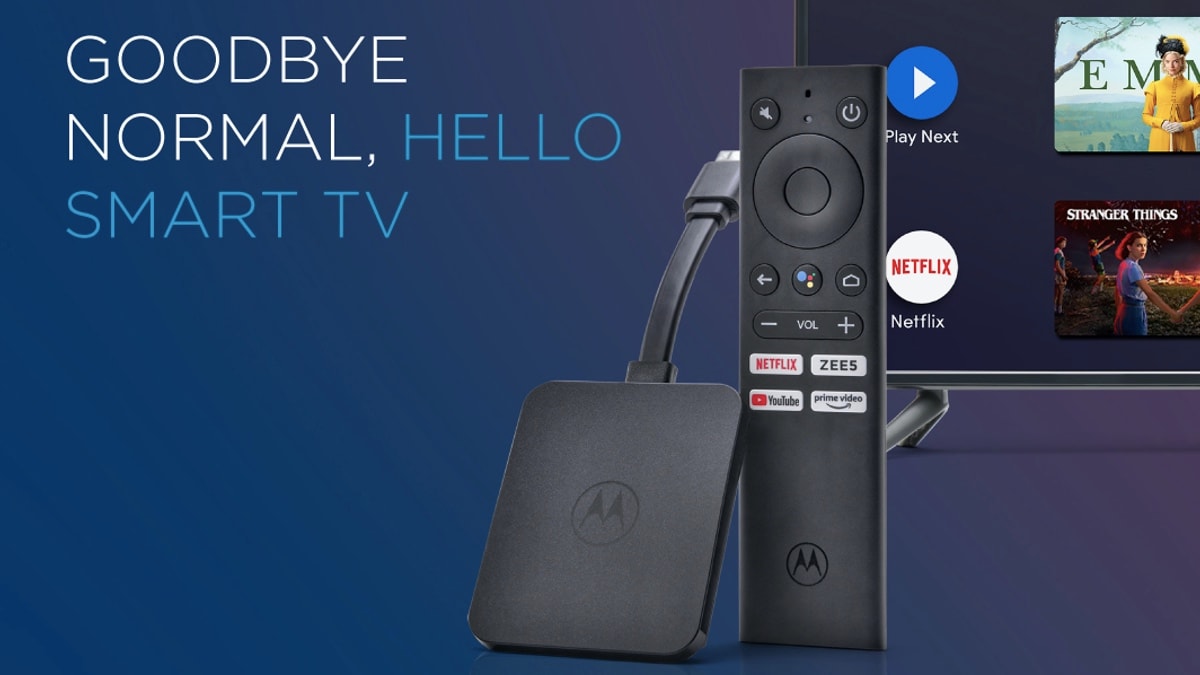 Motorola 4K Android TV Stick has been launched in India for Rs. 3,999, and will go on sale in India in the third week of March on Flipkart. The device is an affordable streaming stick, meant to be used with 4K HDR TVs to support external smart connectivity. The streaming device runs on Android TV 9 Pie, with support for key streaming apps and services including Netflix, Amazon Prime Video, YouTube, and Zee5. The device allows streaming of video content at up to Ultra-HD (3840×2160 pixels) resolutions, with support for HDR formats.

The Motorola 4K Android TV Stick has been launched on Flipkart, and joins a growing range of streaming sticks and boxes from various brands on the platform. Flipkart markets devices such as streaming sticks and TVs under various licensed brands, including Motorola, Nokia, and the company’s homegrown MarQ brand.

The Motorola 4K Android TV Stick is priced at Rs. 3,999, and will be available from the third week of March exclusively on Flipkart. The device goes up against strong competition in the segment in India, including the Mi Box 4K and the Amazon Fire TV Stick 4K, as well as Full-HD options from Flipkart under the Nokia and MarQ brands.

Apart from the key feature of 4K HDR video streaming at 60fps, the Motorola 4K Android TV Stick runs on Android TV 9 Pie, with access to key apps and streaming services such as Netflix, Amazon Prime Video, YouTube, and Zee5. The device is powered by a 2GHz Cortex A53 quad-core processor, with 2GB of RAM and 16GB of internal storage. There’s also dual-band Wi-Fi compatibility and HDR support for the HLG and HDR10 formats.

As is the case with most Android TV devices, the Motorola 4K Android TV Stick has a built-in Chromecast, and access to Google Assistant through the included remote. The remote also has hotkeys for four streaming services, and will be able to access the Google Play Store for Android TV to download additional apps and games for the platform. The device plugs into the HDMI port of televisions, and functions as a standalone device with smart connectivity through Wi-Fi and Bluetooth.