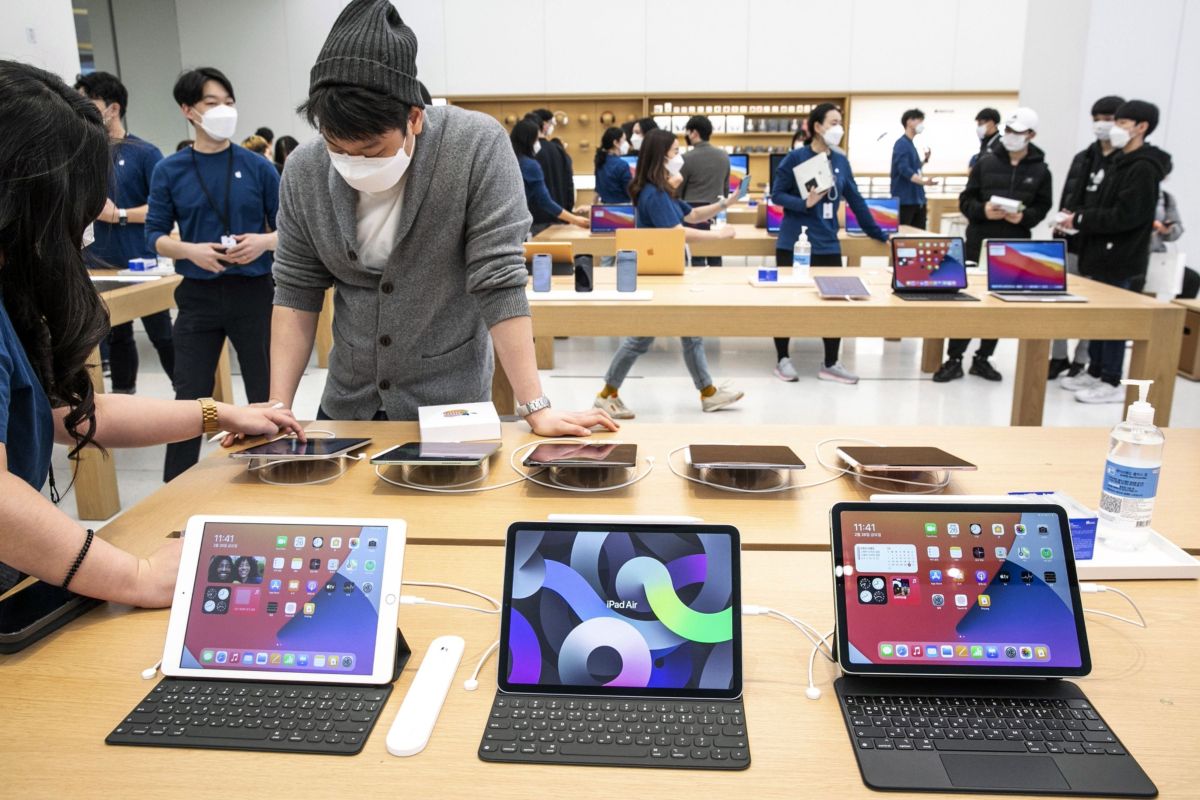 Apple plans to announce new iPad devices as early as April, adding to a product line that has performed particularly well as people work and study from home, according to people with knowledge of the matter.

The company is planning a refresh to its iPad Pro line, adding a better processor and improved cameras, the people said. The new models will look similar to the current iPad Pro models and come in the same 11-inch and 12.9-inch screen sizes.

Various models of the Apple iPad at the company’s Yeouido store during its opening in Seoul, South Korea, on Friday, February 26, 2021. Apple opened its second store in South Korea today.

The devices will have an updated processor that is on par with the faster M1 chip in the latest MacBook Air, MacBook Pro, and Mac mini. Apple designs these processors itself and typically has them made by Taiwan Semiconductor Manufacturing Co. Apple is also looking to include a Mini-LED screen with at least the larger model, which would be brighter and have improved contrast ratios.

In testing, the new iPad Pro devices have used a Thunderbolt connector, the same port on the latest Macs with custom Apple processors. The port doesn’t require new chargers, but it would enable connectivity with additional external monitors, hard drives and other peripherals. It’s also faster at syncing data than the USB-C technology used in the current models.

An Apple spokeswoman declined to comment. The company has yet to announce its first product launch event of the year, so its plans could change.

The iPad generated $8.4 billion (roughly Rs. 60,860 crore) in revenue for Apple during the key holiday quarter of 2020, the most since 2014. Sales jumped on demand from people working and studying from home during the pandemic. As employees and students begin returning to offices and schools in coming months, Apple will be betting on the new iPad models to maintain interest in the tablet line.

The iPad Pro was last updated in March 2020 at the beginning of the pandemic, adding a tweaked processor, support for the Magic Keyboard with Trackpad case, and a lidar scanner alongside the camera.

Apple plans to refresh its cheapest iPad aimed at students with a thinner and lighter design later this year, Bloomberg News has reported. It’s also preparing to launch a new iPad mini with a larger screen as early as this year, an increase from the 7.9-inch display used since the first model. The iPad mini was last upgraded in 2019 with support for the Apple Pencil stylus and a faster processor.

Apple has several other product updates planned for this year. The company is working on new iPhone gadgets and Apple Watches, an accessory for tracking the location of physical objects, and major updates to the MacBook Pro laptop and iMac desktop.