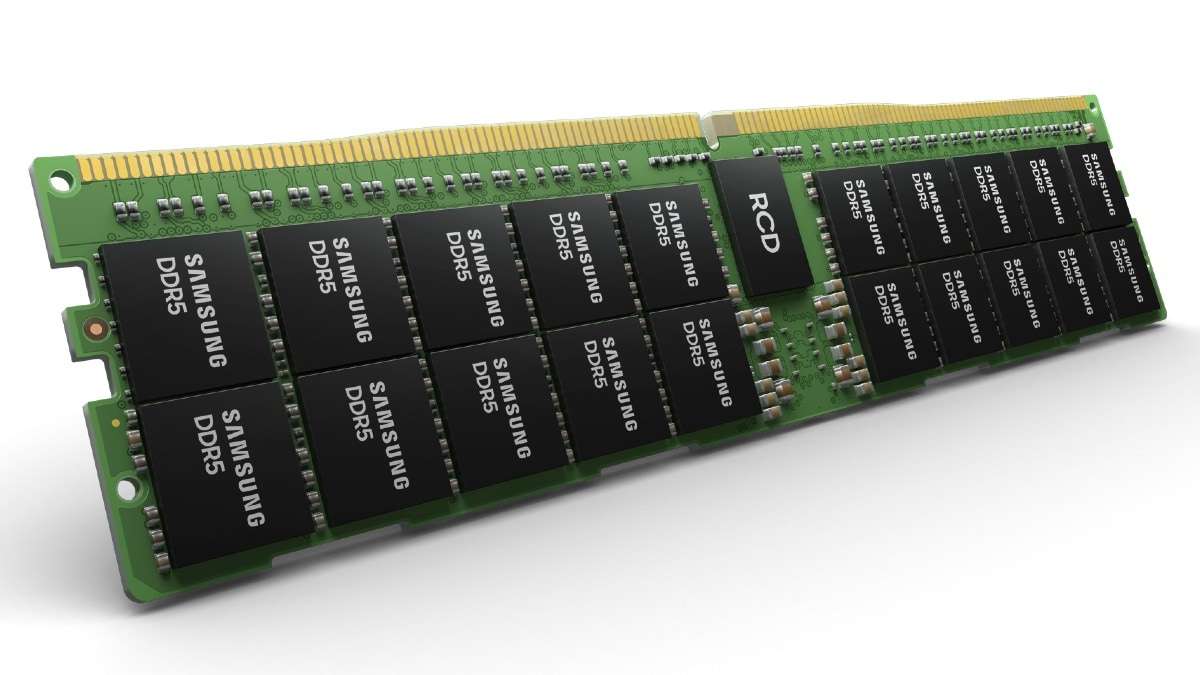 Samsung on Thursday announced that it had expanded its DRAM memory portfolio by bringing a 512GB DDR5 module based on high-k metal gate (HKMG) process technology. The new memory module is designed to fulfil the requirements in compute-hungry, high-bandwidth workloads in the fields of supercomputing, artificial intelligence (AI), and machine learning (ML). The South Korean company claimed that its DDR5 DRAM is capable of delivering more than twice the performance of existing DDR4 modules with up to 7,200 megabits per second (Mbps) data transfer rate.

Instead of using the traditional silicon oxynitride, Samsung’s preference of going with the HKMG technology for the insulation layer of the new memory module is touted to reduce power consumption by 13 percent over DDR4 modules. The new material will be able to reduce the current leakage and help the module reach new performance levels, the company said.

Samsung first used the HKMG process while designing its GDDR6 memory in 2018. However, its adoption on the new module is chiefly aimed to attract data centres and enterprise customers who are looking for high-speed memory solutions to process AI, ML, and data analytics operations.

The DDR5 DRAM by Samsung stakes eight layers of 16Gb DRAM chips using through-silicon via (TSV) technology to provide 512GB of capacity. The company is, however, sampling different variations of the DDR5 module to cater to different memory demands over time.

Although existing desktops and servers mostly support DDR4, Intel has already shown some interest towards DDR5 modules. The chipmaker is also working with Samsung particularly for its new development.

Apart from Intel, Samsung is working with Advanced Micro Devices (AMD) and has sent samples of its new memory module to some data centre platform developers, Bloomberg reported on Thursday.

“By bringing this type of process innovation to DRAM manufacturing, we are able to offer our customers high-performance, yet energy-efficient memory solutions to power the computers needed for medical research, financial markets, autonomous driving, smart cities and beyond,” said Young-Soo Sohn, Vice President of the DRAM Memory Planning/Enabling Group at Samsung Electronics, in the statement.

Samsung’s DDR5 DRAM module is currently in the testing phase, though it is said to arrive for customers by late 2021.

Notably, Samsung isn’t the only semiconductor company that has started working on DDR5 standard. Its homegrown competitor and the second-largest memory chipmaker SK Hynix brought what it claimed the world’s first DDR5 DRAM in October last year. American company Rambus also announced back in September 2017 about the development of DDR5 memory interface chipsets.

Is MacBook Air M1 the portable beast of a laptop that you always wanted? We discussed this on Orbital, our weekly technology podcast, which you can subscribe to via Apple Podcasts, Google Podcasts, or RSS, download the episode, or just hit the play button below.