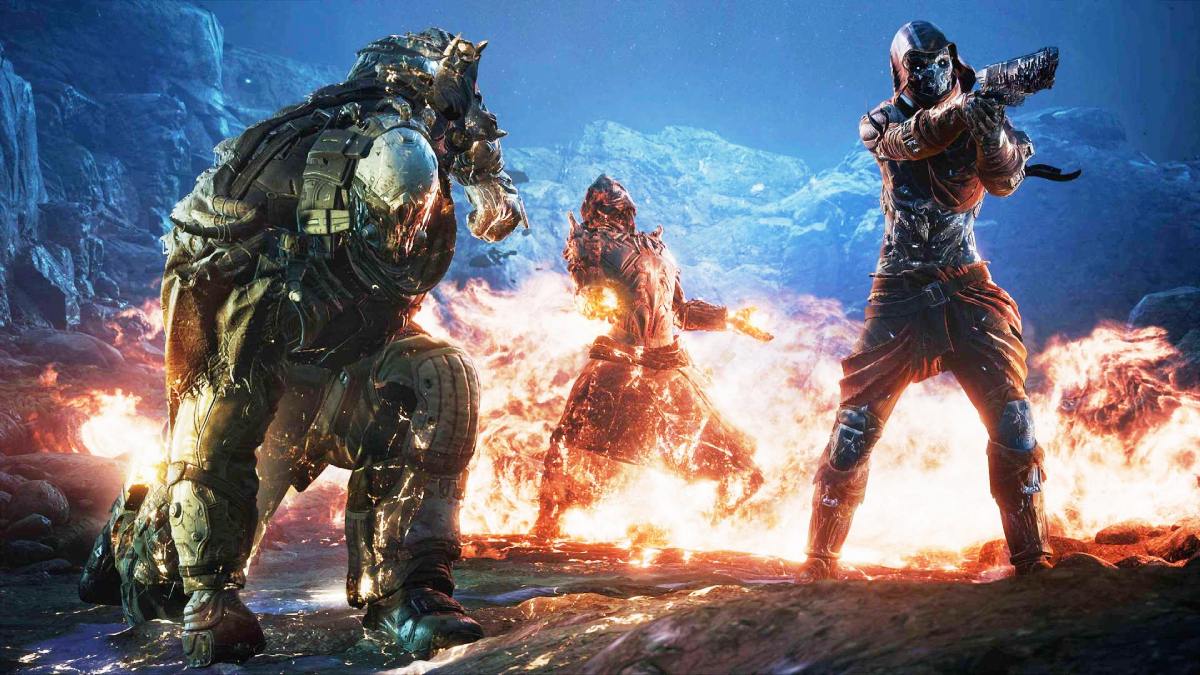 Outriders is set to release on PC, PlayStation, Xbox, and Stadia next week. Developed by People Can Fly, the studio behind iconic shoot ‘em up titles Gears of War and Bulletstorm, Outriders is an RPG-shooter that is primarily designed to be played as a co-op title. Players can play through the story-driven campaign in co-op with up to three players, or have a go at it entirely in single-player mode. Read on to find out everything you need to know about Outriders – from its release date and gameplay to its price and available platforms.

As revealed in the gameplay trailer, Outriders is set on the alien world of Enoch. While attempting to colonise Enoch, an expedition team embarks on a mission to locate a mysterious signal that could help save humanity. However, things go awry when the team is hit by a massive energy storm known as the Anomaly. Those who were trapped in the storm — humans and Enoch inhabitants alike — are all granted certain special abilities.

While the Enoch aliens turn into monstrous beasts with hostile powers, the humans gain abilities to manipulate elements such as time and fire. Players get to take control of these superpowered humans as they try and survive in the dangerous and unpredictable planet. When you start a game, you can create a custom character and get to choose from four classes — Devastator, Pyromancer, Technomancer, and Trickster — each with their own set of special abilities and dedicated skill tree.

The Devastator is described in the trailer as a “biological sledgehammer.” Devastators are deadly in close encounter and are able to clear out hordes of baddies with pure, brute force. The Pyromancer, as the name suggests, can control fire and can dole out serious damage from mid-range. The Technomancer can manipulate technology to your advantage and also comes with a powerful sniper gun to take out targets from afar. The Trickster has the ability to manipulate time and space and is designed for players who prefer skillful close combat encounters.

When it was officially announced at E3 2019, Outriders drew criticism upon being too similar to live service titles such as Destiny (Review) and Tom Clancy’s The Division. Outriders creative director Bartosz Kmita bluntly denied the comparison in an interview with US Gamer, saying that Outriders would be a story-driven experience.

“Outriders is not games as service, so we’re not even thinking about that… we wanted to have a game that you would start and finish. A game as a service will chop the content into parts, but we didn’t want to do that,” Kmita said. Even on the FAQ section on the official Outriders site, the game has been strictly promoted as a “story-driven RPG shooter.”

The FAQ section also revealed that Outriders will not allow players to go up against other players. “The question of PvP is asked a lot, but right from the earliest concept, Outriders has been designed as a PvE game. We’re committed to making the best single-player and co-op RPG shooter out there.”

Outriders will also support cross-play. That means you can play Outriders “with any of your friends on any other platform,” as per the FAQ page.

Outriders will be available in two editions: Outriders Day One Edition and Outriders Digital Standard. There’s no difference between the two — except the fact that the Day One variant is the physical copy of the game, whereas the Digital Standard is just the downloadable version of the game on PlayStation Store.

Customers on PlayStation can avail the game at Rs. 3,999 / $59.99 via PlayStation Store. At the time of writing, the online store only listed the PS5 version of the game. The PS4 variant (Day One Edition) can still be availed via Amazon.

Xbox users can purchase the game at Rs. 3,999 / $59.99 via Microsoft Store for both previous and next-gen consoles. Outriders will support next-gen upgrades on both PlayStation and Xbox at no additional cost. Outriders will also be available on Xbox Game Pass starting April 1 — the game’s release date.

PC gamers can avail the title via Steam at Rs. 2,999 /$59.99 and via Epic Games Store at Rs. 2,980. It should be noted that Outriders will not feature microtransactions and will be a complete experience out-of-the-box.

To run Outriders, PC games will need at least 70GB of free space and Windows 10 (64-bit). Here are the requirements in full:

There’s no word on when reviews are expected for Outriders, but they can be expected in the week of release.

Will you be playing Outriders? Let us know what you think of the game on our dedicated Gaming Community where you can connect with fellow gamers, seek tips and guides, or simply rant about any irksome game or feature you came across.