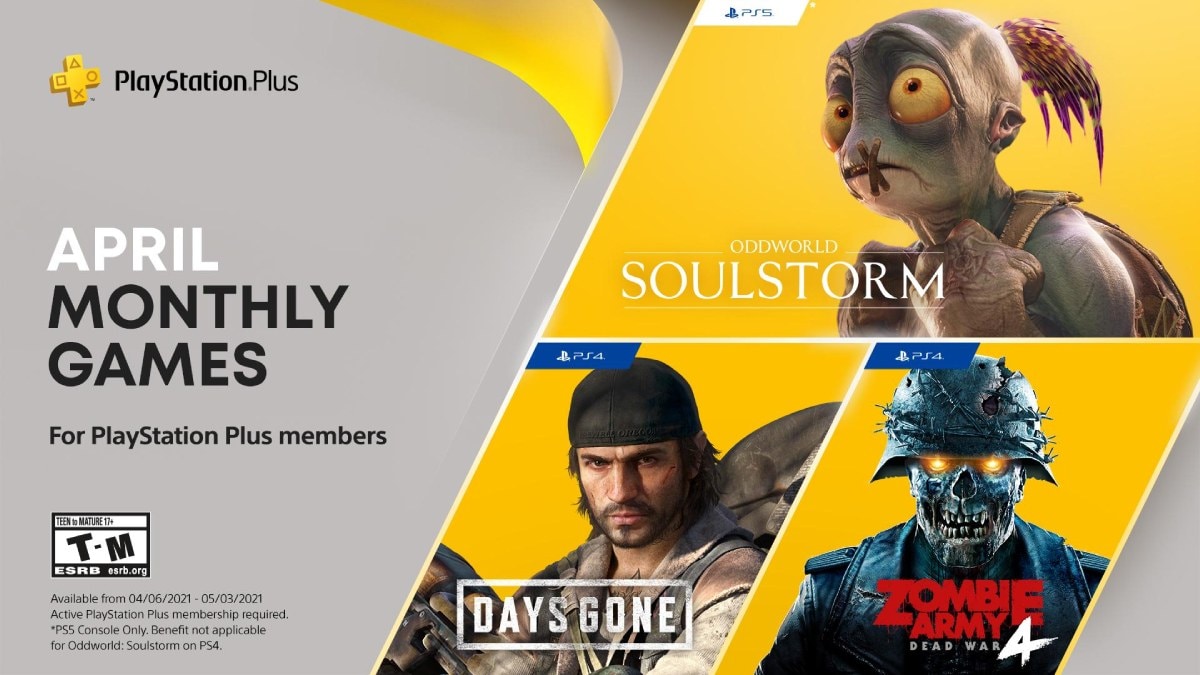 PlayStation Plus subscribers will have their hands full with monstrous quests in April as the free games lineup for the month brings two zombie survival shooters and an otherworldly platformer. Days Gone, Zombie Army 4: Dead War, and Oddworld: Soulstorm will be available for free for PS Plus subscribers starting April 6. The first two titles will be exclusively available for PlayStation 4 users, and Oddworld: Soulstorm will be a PlayStation 5 exclusive. Subscribers still have until April 5 to scoop up the free games from March – Final Fantasy VII Remake, Maquette, and Remnant: From the Ashes.

Sony revealed the free PS4 and PS5 games on its PlayStation Blog, announcing that the titles will be available for download from April 6 to May 3. PS5 users will have until April 5 to download the arena-based car combat title Destruction AllStars that has been available for free for gamers on the next-gen console since February.

A PlayStation 4-exclusive, Days Gone (Review) puts gamers in the shoes (and on the heavily-modded motorcycle) of outlaw-turned-drifter Deacon St. John who embarks on a visceral quest to find his wife Sarah as throngs of zombie-like creatures (known as Freakers) wreak havoc in a post-apocalyptic world. While the story was met with much criticism, Days Gone impressed critics and gamers alike with its tense gameplay and gorgeous visuals. The game’s high point comes whenever Deacon takes on Hordes, which comprises a swarm of Freakers — numbering anywhere between 50 to 500. Taking on Hordes isn’t an easy task, either. You need to constantly craft weapons and special ammo, weave through obstacles, figure out how to best utilise your limited resources — all at the same time while hundreds of Freakers rush at you menacingly, very much like the zombies in the Brad Pitt-starrer World War Z. Not for the faint-hearted, this.

If Days Gone gives you sleepless nights, Zombie Army 4: Dead War could be the perfect respite you need. Designed to be best enjoyed with friends, Zombie Army 4: Dead War is a third person shooter that lets you take on a zombie army led by none other than Adolf Hitler himself. Although a single-player option is available, the campaign plays out best on multiplayer. With the pandemic not relenting anytime soon, we can’t think of a better way to spend an evening than to take down Hitler and his zombies with your online friends.

Slated to release worldwide on April 6, PS5 gamers will have free access to the platformer on the release date itself. A reimagining of the classic 1998 title, Oddworld: Abe’s Exoddus, Oddworld: Soulstorm is a 2.5D (or pseudo-3D) side scroller that revolves around a strange creature named Abe who must save his even-stranger Mudokan friends from slave labour in the fictional realm of Oddworld. The single-player campaign promises challenging levels and an intriguing story to boot.

Apart from the free PS Plus games, PlayStation users will also have access to 10 games free of charge, as part of Sony’s Play At Home initiative till April 22. From April 19 to May 14, the critically-acclaimed action-adventure RPG Horizon Zero Dawn (Review) will also be available for free under the programme.

What do you think of this month’s free PS Plus games? Let us know on our dedicated Gaming Community forum where you can connect with fellow gamers, seek tips and guides, or simply rant about any irksome game or feature you came across.

PS5 vs Xbox Series X: Which is the best “next-gen” console in India? We discussed this on Orbital, the Gadgets 360 podcast. Orbital is available on Apple Podcasts, Google Podcasts, Spotify, and wherever you get your podcasts.