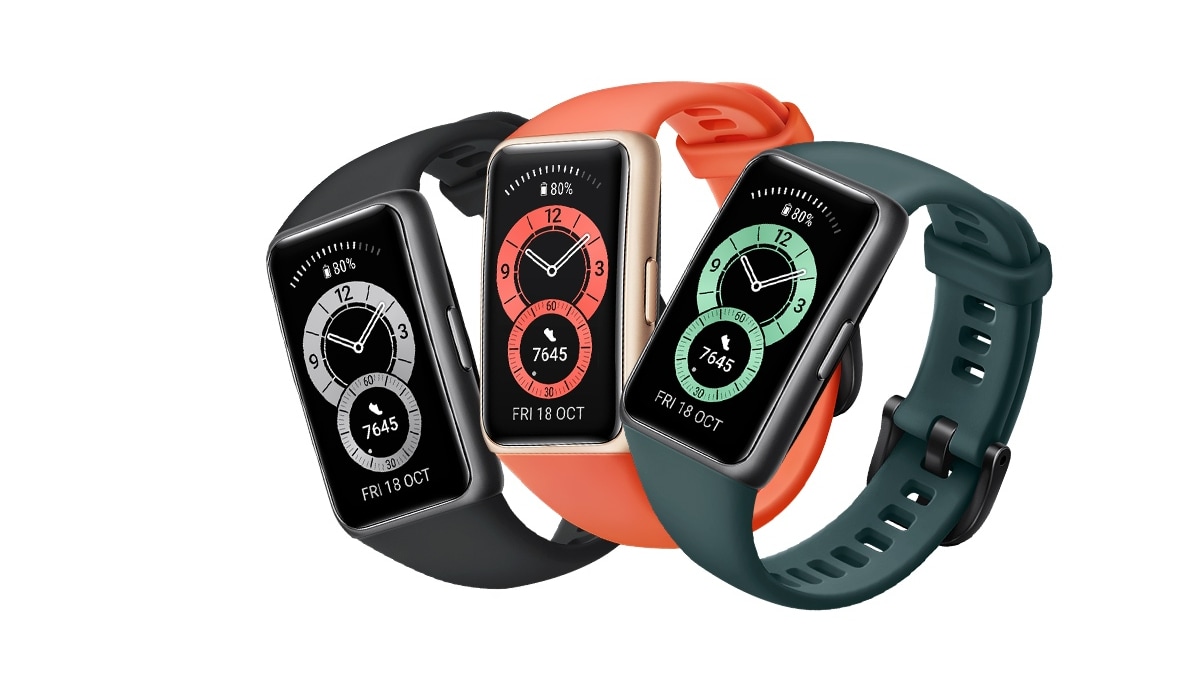 Huawei Band 6 was launched on Friday in Malaysia as the latest fitness wearable from the Chinese company. The band has a large AMOLED display and is said to offer up to two weeks of battery life. The new fitness wearable comes with premium features such as heart rate, sleep, SpO2 (blood-oxygen), as well as stress monitoring. There are over 96 workout modes offered on the Huawei Band 6, and it can also relay phone notifications for incoming calls and messages.

The new Huawei Band 6 is priced at RM 219 (roughly Rs. XX) in the Malaysian market. The wearable comes in Amber Sunrise, Forest Green, and Graphite Black colour options. The Huawei Band 6 will be up for grabs on the official Huawei online store starting Sunday, April 4 in Malaysia. The availability of the new fitness wearable in other markets is yet to be announced.

Huawei Band 6 features a 1.47-inch AMOLED Full-View (194×368 pixels) colour display with a 64 percent screen-to-body ratio. The screen of the Huawei Band 6 is said to be 148 percent larger than its predecessor, the Huawei Band 4. The new wearable has a skin-friendly UV-treated silicone strap and weighs just 18 grams. It is said to offer up to two weeks of battery life or up to 10 days with heavy usage. The company claims that the Huawei Band 6 offers two days of battery life in just five minutes of charging. It supports Huawei’s TruSeen 4.0 24×7 heart rate monitoring, TruSleep 2.0 sleep monitoring, as well as the company’s TruRelax stress monitoring technology. The fitness band also comes with SpO2 blood-oxygen saturation monitoring.

There’s a menstrual cycle tracking feature on the Huawei Band 6 as well as the ability to control music playing through the phone. But both these features are only supported on Android and not on iOS devices. The fitness wearable has over 96 workout modes that include basic ones like running, swimming, elliptical, rowing, treadmill, among others. Huawei Band 6 also offers features like app notifications, alerts for incoming calls and messages, weather updates, and a remote shutter for the phone’s camera connected to the wearable. The fitness band measures 43×25.4×10.99mm and is 5ATM (up to 50 metres) water resistant. Huawei Band 6 has a magnetic charging thimble, supports Bluetooth v5.0, and has a side-button for navigation support. It is compatible with phones running Android 6.0 or later and iOS 9.0 or later.

Pixel 6 May Be Powered by Google’s Own ‘GS101’ Whitechapel SoC: Report

Helix Metalfit 3.0 With SpO2 Tracking, Sports Mode Launched in India by Timex: Price, Specifications
Google Launches Campaign to Pressure Apple to ‘Fix Texting’, Adopt RCS Messaging
Zhao’s Denial, Users’ Distrust: Here’s What We Know About WazirX-Binance Debacle So Far
Taiwan Dominates the World’s Supply of Computer Chips – No Wonder the US Is Worried
The Gamevice proves the value of a handheld but only if the price is right