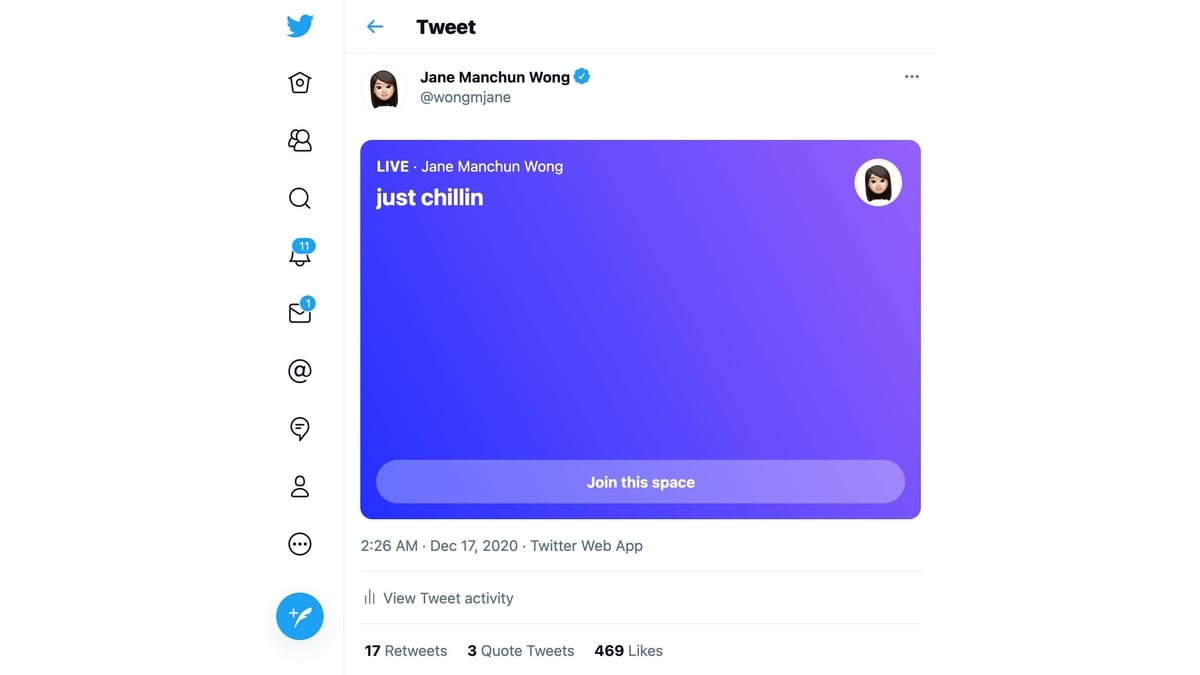 Twitter Spaces is reportedly rolling out for desktop Web browsers. Twitter Spaces is an audio-only chat room feature that rivals Clubhouse. It was earlier tested for iOS and was subsequently tested for Android smartphones. Twitter hasn’t mentioned any specific information on when the desktop version will be rolled out to users. Multiple platforms are releasing their own Clubhouse rival where Discord and Telegram have released their versions. Facebook, LinkedIn, Mark Cuban’s Fireside, Slack, and Spotify are also developing their own iterations.

A tweet by reverse engineering expert Jane Manchun Wong showcased how Twitter Spaces for desktop Web browsers will look like. Another couple of tweets by tipster noah (@magusnn) on March 26 show how the desktop version of Twitter’s new feature will look like. As per a report by The Verge, Twitter confirmed working on the new feature for desktop browsers to the publication. Gadgets 360 has reached out to Twitter for confirmation on the same and an expected rollout timeline. This report will be updated when we hear back.

Twitter’s expansion to desktop browsers was reported soon after the release of Discord’s Stage Channel on April 1. These additions to the social media platforms are similar to Clubhouse where users can hold audio-only calls with limited speakers and a wide audience. The hosts can select which member of the audience can speak in the call after the members have ‘raised their hands.’ Twitter is expected to roll out Spaces for its users this month.

Clubhouse was launched in April 2020. It is an invite-only audio-based social networking app that is only available for iOS at the moment. CEO and co-founder Paul Davison confirmed recently that Clubhouse is developing an Android app as well. Telegram also launched Voice Calls 2.0 that will let users conduct live voice chat sessions with unlimited participants. It will give users the ability to record voice chats for future reference, hand-raising mechanism, invitational links, and voice-chat titles.

Earlier this week, Twitter added some new features to its Fleets — its disappearing posts feature like Instagram and Snapchat stories. Users can now add stickers in the form of GIFs and Twemojis (Twitter’s animated emojis).

Dead Space Review: A Bloodcurdling Return to the Ishimura
We Were THIS Close…
PayPal Will Lay Off 2,000 Employees to Cut Costs Amid Ongoing Economic Slowdown
Sony, Xbox and Nintendo Will Not Be at E3 2023: Report
Vi Rs. 99 Prepaid Recharge Plan With Access to 200MB Data Launched